Polycrystalline (or multicrystalline) cells are made from slices cut from a block of silicon. If the monocrystalline cells are a single crystal, they are composed of a large number of crystals. This gives them a speckled reflective appearance, but once again, you can see the slice thickness. Photovoltaic solar panels of such cells are less efficient and at the same time cheaper than monocrystalline cells. It should be mounted in solid frame.

Finally, amorphous cells are produced by placing a thin layer of amorphous film (non-crystalline) on large surfaces. The photovoltaic solar panels are the least efficient species and at the same time cheap. If a thin layer is made of amorphous flexible structure and fabricated on a flexible surface, the entire photovoltaic solar panel can be flexible. However, the only problem with Amorphous cells is basically that, in the first few months, the constant output power decreases over time. An amorphous panel should be produced after this period. 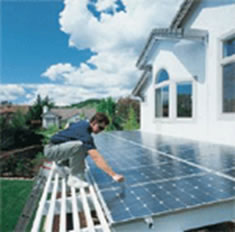 Discover the Process of Making the Solar Panel

The construction of solar panels is a delicate process, and by the second quarter of the last century, the development of solar cells has become increasingly more efficient and economical to develop in semiconductors and photovoltaics.

The solar panels usually consist of finely cut crystal silicon, about one centimeter in diameter. Like thin wafer, for shine, sliced and polished discs are then treated with any possible damage. After the sputtering process the dopants (photovoltaic solar cell ) Metal conductors spread in every disc. To protect the solar panels after processing, a thin glass cover is glued on top of the photovoltaic cell. After the protective glass is adhered, the surface of the panel is covered with an expensive thermal conductive cement. The thermal conductivity of the cement protects the overheated solar panel from the high heat and the over-energized solar panel is able to transform it into electricity, otherwise the over-heating in the unit area reduces the effectiveness of the solar batteries.